If you want the best, most authoritative, most compelling sports-writer coverage of Kentucky’s quest to win two more games and complete an undefeated college basketball season with the NCAA title, riding with Kyle Tucker of the Louisville Courier-Journal is where you want to be.

No writer has been closer to coach John Calipari’s program the last few years. If it is happening in or around Kentucky’s team, my man KTuck, still known in Virginia for his exhaustive, game-changing beat work on Virginia Tech football, is all over it. Hell, he’s all over it before it happens.

You know what I mean. He’s the best there is at the day-to-day college sports grind. Nobody grinds the grind like Kyle, and that’s a badge of pride not awarded lightly. He’s just the best. He cares. He knows his stuff. And through skillful reporting and writing, he wants to you know and care, too.

Check him out all week through the title game next Monday, where Kentucky will be if it beats Wisconsin on Saturday night. 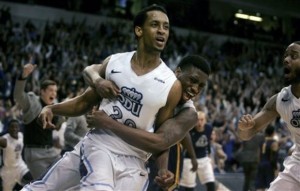 I saw a tremendous finish to a college basketball game the other night, one of the best I’ve seen live. Maybe the best. I was sitting just to the left of the basket, at a media table, when Trey Freeman banked in his running 3-pointer that beat Murray State and sent Old Dominion to the NIT semifinals next week at Madison Square Garden.

The ball arced from about 30-feet away. It banked into the basket cleanly. And the white-noise eruption of multiple jet engines, or something like it rising from the seats and bouncing off the ceiling, ensued. And it sustained for many minutes of pure delirium at the Constant Center.

Yet I barely moved a muscle the entire time, except for my fingers pounding a keyboard and my eyes scanning a stat sheet. I was working as a freelancer for the Associated Press. And it was my job to file a short story on the game immediately, if not sooner, after the horn sounded.

So I stayed calm, composed my words and hit the “send” button mere seconds into that swirl of chaos.

But I wondered as I left The Ted a bit later, after refiling a story with quotes from players and coaches, how I’d have reacted had I not been on the clock, but rather just a patron in the stands.

I didn’t have to ponder long, though, because I’d been in similar situations, and so I already knew the answer. I would have looked on with a large measure of minimal reaction. I’d have recognized the magnitude and serendipity of the moment, certainly, and probably uttered a “Wow” or an “Oh my God” or “Well, how about that?” to my seat-mates. Would have offered appropriate applause for the athletic drama.

But go crazy? Lose a lung bellowing? Rush the court? Feel lifted on wings, somehow, the next day or two? Not quite. That shipped sailed long, long years ago, if it ever really floated in the first place.

No cheering in the press box is right, and proper. It is a workplace, not a wing joint. And so working in sports journalism — and I started part-time in college — stripped from me all but the most deep-seated fragments of “fan” that percolate to the surface, for this child of Philly sports, only occasionally via an Eagles or Phillies game.

So it was during some of the greatest, most famous sports moments I was blessed to cover as a writer: Kirk Gibson’s World Series home run in 1988. Keri Strug’s gold-clinching vault in the ’96 Olympics. Payne Stewart’s putt to win the ’99 U.S. Open. They happened. I soaked it in. And with the crowd noise bursting my ear drums, my brain immediately began forming words and sentences. No time for emotion. No instinct toward emotion, really. Labor needed to be performed.

But react impassively often enough and “impassive” becomes a default state. That’s the danger. It drills so deeply into the nervous system, this requisite detachment, it infiltrates personal spaces and behaviors far from the arena. It did for me, I admit. So let me re-state that thesis as a singular assessment.

Still, as I ruminated on my ride home from a Ted gone bonkers, I truly was pleased I had witnessed what I had witnessed, and also that I’d been able to provide the news-service story read by much of the country  — well, anyone who cared about the game anyway.

Had you looked at me before, during and after that ball banked through, however, you’d have had no clue to my satisfaction for having added a cool, great moment to my mental menu. I know that is unfortunate collateral damage of the task-focused, neutrality-required, deadline-driven vocation in which I trafficked for so long.

There’s no crying in baseball, and there’s no emotion — if it can be helped — in writing about the pulsing emotion of sports. That’s irony not lost on a sports “fan” lost long ago.

I’ve been thinking about how much negative stuff I do in an average day, mindlessly. Stuff that doesn’t help me improve as a person, friend, partner, employee, citizen, stuff that actively detracts from that goal., in fact. I keep a mental list. It’s staggering. Embarrassingly wasteful of precious time. It comes to me depressingly easy if I let it; eating or drinking or reading or watching or coveting the wrong thing, and too much of it in many cases. Using empty and even hurtful words to people I love and respect when the opposite is appropriate and would be so appreciated. Burying feelings, building walls, denying truths. Failing to comfort or guide or inspire myself, let alone others. Wallowing, in the face of such grace and abundance? How dare I!

It’s mid-March, but I hereby resolve, as if a new calendar year is turning, to pursue the positive action, the uplifting outcome, the kind or soothing word. To stop and be mindful of the options each moment brings, and to do and say what I know to be true, to spurn the false result and the temporary road.

I don’t expect this to be easy; breaking habits and patterns and attitudes never is. And I don’t expect a flawless tomorrow or next day or next week. But I do expect to be better tomorrow and the next by keeping this vision in sight. By admitting that I am a flawed individual who owns the strength and the will to do better by myself and by those with whom I share space and life and dreams.

We get to our places and crossroads as we will. But speaking personally, I know I have rolled over and too often allowed inertia, especially lately, to decide too much of what follows, without reason or benefit.

Time to chart a new path. One day at a time? There is no other way.

I wish I had stayed up with this college basketball game to its conclusion Tuesday night. North Dakota State was battling South Dakota State – isn’t that great? – for the Summit League tournament championship and an automatic berth in the NCAA tournament.

North Dakota State wound up winning 57-56. The Bison rumble on, the hard-luck Jackrabbits scoot along to the National Invitation Tournament.

March is full of euphoria and heartbreak like this, it’s why the term March Madness was coined lo these many years ago, and why so many lives rise and fall with it. But now and again there is something to be gleaned beyond the winner and loser. South Dakota’s coach Scott Nagy delivered that in his post-game comments, according to reports on the game.

I’ve been in enough post-game press conferences to hear in my head the reporter ask Nagy the obligatory, “Coach, what did you tell your team in the locker room?”

This is what Nagy said:

“Most people don’t try, they live in the middle. They don’t put their hearts out there and they try and protect themselves. When you do this and you put your heart out there in front of all these people, sometimes it’s exhilarating and sometimes it’s incredibly painful. But that’s what living feels like . . .

“I hope they live the rest of their lives that way and they don’t protect themselves. It’s hurtful sometimes. Very hurtful.”

I would venture this is always a timely message and reminder, for a lot of us. Timely, yes. But poignant, too. Inspirational, for sure. I’ll read that quote a few more times this week. And the next.

It’s also a reminder that we all need coaches in our lives, of some sort, even if they pass through in just the flash of a basketball press conference.

I have been absent, against the whims of my better self.

My intention upon starting a job at Old Dominion a couple weeks ago to write interesting stuff off of academic beats for the school website was that I would rise extra early and bang out a couple of blogs here per week – or else do them late after I’d gotten home, had some dinner and walked Ollie.

I evidently need more self-discipline – probably true – or like most of us, more time in the day – also probably true.

Having to be some place by a particular morning time for the first time in my life – outside of 8 a.m. college classes – is the culture shock I guessed it would be. I know, call the waaaa-mbulance! The whole world has done that forever. I get that. I’m just saying it’s new for me, that’s all. Which means if I want to get up, drive 10 minutes for a 30-minute swim, shower, eat something, write a bit here – because writers have to write, right? – and walk Ollie before work, well . . . getting up at 3 in the morning on purpose just doesn’t seem proper.

Writing for yourself at night, after writing for someone else all day? Sure, writers all over the place do it. I’m still trying to figure out how.

I HAVE done a bit of it, at nights and on weekends, serving a couple of freelance clients who have been really good to me the last couple of months. But I have lapsed in my own ideas and execution — again, against my will — and it makes me, not sad necessarily, but restless because writing feels so good to me. It feels good to all writers, when it isn’t driving them insane, of course.

So I guess I just say all this more as a pep talk to myself than anything. I created this outlet for a reason, when I needed it most, and I do not want to ignore it now just because my brain is occupied with salary-and-benefits-related responsibilities for many hours each weekday.

I won’t then, despite appearances I won’t. I still vow to use the smart people I am around every day, the brilliant writers and scholars and teachers, as inspiration to be better, to think and learn deeper, to be a more intuitive reader and writer and, in the end, a better person I am certain.