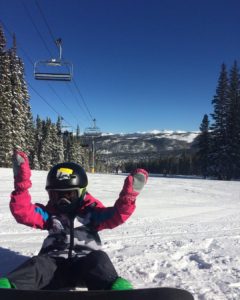 This is not Caleb.

I don’t know Caleb, but evidently he is 4-years old. Someone, presumably his parents, dropped him off Saturday at the Breckenridge, Colorado resort ski school. Caleb was among the half-dozen children, all ages 4 to 6, assigned to my son, a snowboard instructor who is finishing his second month at Breck.

He is a newbie instructor, a year out of U.Va., so newbies get the wee ones by default. New high-school teachers get the convicts, new snowboard instructors get the pants-pee-ers. That’s how it works.

Caleb faltered early in the day. He had to have been nervous, probably scared to death. He is 4, for crying out loud. It was cold and he was surrounded by strangers and a blanket of white.

I don’t know how my kid handled the situation; all he reported via good-natured text was Caleb, well, you know. I suspect he comported himself well, that he calmed Caleb and paged one of Caleb’s responsible adults back to the school to gather their pup.

But it both amuses and heartens me that my kid has been thrown into the abyss to deal with cold, scared children with odd appendages lashed to their feet, and their parents, always an unknown quantity as well.

He is out there in the Rockies doing what he wants to do, living how he wants to live, supporting himself and his dreams. While he is at it, he is learning the best kind of lessons — how to think on his feet, how to talk to and persuade people young and old, how to be patient, kind, confident and certainly stern as necessary. And to take distinct gratitude when an envelope appears with a tip and a personal thank you note from a parent appreciative of my son’s attention and demeanor.

From what I know, “ski bums” need not apply for these positions. Slobs? Not when spot checks of his resort-owned, four-person apartment are frequent. Professionalism is a thing, every day, all day, on the mountain or in the office. This is wise to remember.

I have no idea how long he’ll stay at Breckenridge or that particular vicinity. The work is seasonal, of course, and at 23, the time from one winter to next tends to be especially unpredictable. But I know out West is where he wants to be, to follow his muse, embrace his youth and savor this life.

If the need to deftly deal with a childhood bladder accident or two is a prerequisite along his path to somewhere, that price is small indeed. His rewards are already rich, and getting richer.