I’ve been ruminating today in the wake of Dave Rosenfield’s death last night at 87. The legendary Tidewater/Norfolk Tides general manager was among the first

Norfolk sports figures, and longest-lasting by far, I met in my first week at the Norfolk newspaper in 1983. 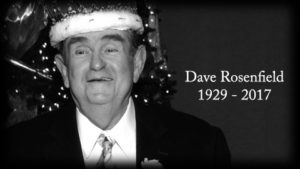 I think in 34 years I saw him once outside of a ballpark or a sports banquet, at a very long-ago lunch. I hadn’t spoken to him in more than two years, although I emailed him a couple of times over that period after he’d had some health scares. I never got a response, but I trust he received my well-wishes.

After leaving the regular sports ramble, I regret I didn’t drop by his office at Harbor Park to say hi, or make it a point to happen upon one of the weekly round-table lunches he enjoyed with other local sports figures. Wrapped up in my own woes and worries, I suppose.

I will miss Rosie – my preferred spelling of his nickname — like so many in Greater Norfolk, and today I riffle through vivid memories of our professional relationship.

It was early August and they gave the really green greenhorn a weekend assignment to cover some summer-league baseball championship at Met Park – known, of course, as Old Met Park since that dump was wrecking-balled in 1993.

I skulked to the far corner of that narrow press box low behind home plate, all of about 30 feet long, to set up shop for the game. It wasn’t a minute before I felt eyes from a hulking and, um, very portly man sizing me up. I gave a sideways glance as that form slowly approached.

“Hi,” he said, extending his meathook paw once employed as a college and minor-league catcher. “I’m Dave Rosenfield.”

They’d told me to look for, and look OUT for, Dave before sending me onto his turf. It was totally like walking into a fiefdom. Dave was already a fixture, 20 years into his local minor-league baseball tenure. He owned a place and a career and a passion as much as anyone I have ever known.

I returned his hello, explained just a little bit about how I came to be in his presence that afternoon, and a relationship was struck. It was one that grew more familiar, and occasionally contentious, when I took over the Tides beat – then still a full-time, traveling, exhaustive grind — from George McClelland in 1988.

It was a fortuitous, for me, and rewarding association. Rosie loved to hear himself talk, and so he enjoyed holding court with coaches, major-league executives and reporters. For the latter, he was forever a go-to guy for honest commentary, unvarnished opinion and franker still, off-the-record truth as he saw it about sports, politics and scads of matters far-afield.

The remarkable, underlying constant was the knowledge that Rosie was one-degree-of-Kevin Bacon from pretty much any individual who ever played professional baseball. Ev-er. Think about that. It’s a hell of a thing. He knew everybody and everybody knew him. His kind is down to a precious few.

I know I pissed him off many times with my reporting and writing. I scooped the Mets’ announcement of September call-ups once and he and the Mets’ GM tore me a new one. He lectured me early in my coverage tenure about describing the Tides’ play as “miserable” in print after they’d played a particularly miserable game.

During a week of rainouts, I quoted the groundskeeper about what a stink dead earthworms beneath the field tarp created around the home-plate seats. Rosie was not pleased.

Another reporter and I bought plane tickets and invited ourselves along to Shea Stadium when he and the Tides president went to talk about the Mets’ demand for a new Tides stadium or else. Rosie harrumphed and vowed to give us no information, but he didn’t ban us from the Shea offices. We ended up sharing an airport cab both ways. And I’m certain he shared plenty of information.

I disappointed him badly at least once, too, although he never said so. I forget the occasion, maybe his 50th year in the business, and I wrote a profile of him that did not emerge as the puffery he expected, but a more warts-and-all recasting of his local omnipotence and contradictions. When I saw him, I could tell it had hurt him. But no one ever said the story wasn’t accurate and fair.

Throughout, and even thereafter, Dave remained a friend, a supporter and an unforgettably engaging character. He cracked himself up with story upon story, usually punctuated with his huge thunder-crack of a laugh. He ripped into employees up and down. It could not have been easy to work for one so demanding and temperamental, or even to be his close friend. I know people who were estranged from him for years before mending fences.

Yet he somehow fostered surprising loyalty. Rosie being Rosie, if you knew him even a little bit, was a great, never-dull and stunningly consistent show. During his full-time run as GM – before emeritus status the last few years – he missed a very small handful of games. I am fuzzy on this, but I think he missed just one – if any at all — in the late ‘80s when his first wife died. The ballpark was his solace and his sustenance, through every workaday chore. He even created and hand-wrote the entire International League schedule for decades.

What the hell? That’s crazy.

I enjoyed seeing him around the ballpark. I enjoyed his pontifications. I enjoyed Rosie being Rosie in its entirety, and I file it as a highlight of my journalistic life.

Regards, and sympathy, to his family, friends and the entire Tides front office.