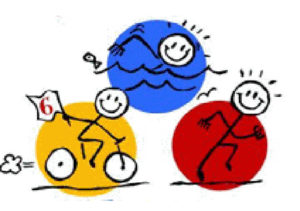 I run like a madman now. And swim, even though my elbow is killing me. (Another surgery in store? :/) Oh, and I bike a lot. I have this great, new mack-daddy Cervelo road bike, did I mention?

This is all part of a nutty, consuming, late-50s – my late 50s – hobby I’ve taken up called triathlon. Believe me, I’m as stunned as anyone. More stunned than anyone. Endurance sports never, ever were of interest to me, although I guess you could argue pretty well that baseball and golf are endurance sports in their own way, given their innate sloth-like duration (and tedium).

Anyway, the point is, I acted on a slow-building urge to do a sprint triathlon, the shortest version of the swim-bike-run trifecta, last year when my daughter informed that she had entered a September tri in Santa Cruz, down Highway 1 from her home in San Francisco. Why, I exclaimed in a Eureka moment, let’s do Santa Cruz together!

Running had been an issue for me following three arthroscopic knee surgeries over the last decade. Pounding the pavement was too much discomfort and risk, so I flat stopped. But a funny thing happened over a year ago; I’d gone for a short run for the hell of it and . . . nothing hurt. I couldn’t believe it, actually. It felt good, and it formed the foundation, unspoken but percolating, of this triathlon idea.

I had started swimming to replace running way back when. So now if I could run without incident, and I had the swimming down decently enough, well, I’d biked since I was a little kid, right? Maybe I could actually do this.

Long story short, I have started and finished, with varying degrees of timed success, three sprint triathlons, plus a few 5K races in the last year. Now, the sights are set on the next natural step – an Olympic-length triathlon in and around Jamestown, Va. in four weeks. What’s an Olympic triathlon? In this case, a 1,500-meter open-water swim in the James River, a 40k bike ride (roughly 25 miles) and then a 10k, or 6.2-mile, run.

Why are the sights set so? I think it is for the feeling of gratitude I get after I have put one foot after another for an hour and experience no out-of-the-ordinary aches and pains. And, other than my something-is-clearly-wrong elbow situation, the satisfaction of being able to swim non-stop for an hour. As for biking, which I had never really done beyond neighborhood toddles, I have learned straight up that it is harder than it looks and that it is the area in which I need to improve the most in order to compete.

And I do mean to compete in my age group (55-59), although honestly competing to WIN the age group appears to be a pipe dream. Let me tell you, a lot of these old fellas are beasts! Their genetics, determination and iron constitutions can be intimidating to behold. I admit it seems beyond my capability and nature to rise to that level.

Still, I could surprise myself again. That I have come this far, to where I have visions in my mental attic of actually eyeballing the half-ironman (70.3 miles) challenge, is inspiring. And scary. And, of course, insane.

I don’t share this to be annoying or to fish for any sort of compliments. The name of a Facebook group I’m in says it best, the Pathetic Triathletes Group. Our kind can be self-important and obnoxious; go run and swim your little race there fella, who cares? But I share it more out of a sense of amazement at the course – pun intended – I have taken and an appreciation for the possibilities I have placed before myself after years of inertia. Gone is that reflexive notion that I just couldn’t, when in fact I and you and we always can.

Maybe we won’t always finish, but we damn well can start. Nothing pathetic about it.