Way back in the day, when men were men and newspapers minted money, I’d fly a lot for work. Many times, I would intentionally route myself from Virginia through Philadelphia with a longish layover, two hours or more.

I grew up in a house about 10 minutes from the Philly airport, the home my parents lived in until about 10 years ago. I’d give them a heads-up when I’d be coming through town, and dad – mom never learned how to drive – would meet me outside the terminal, behind the wheel. I’d pile in to the little green Escort wagon and we’d be off for the house, a quick lunch and a great and timely visit before the dash back to my connection.

I am thinking of all of this now as I sit in the Philadelphia airport, an hour from boarding a connection to San Francisco, one of my top-five places to visit. That could be because my daughter lives there now, although I think it was in the top five anyway. Nonetheless, I haven’t seen her since February, so I plan to royally enjoy the next four days in the Bay Area. Catching up, hanging out – at the Giants-Rockies ballgame tonight, incidentally – just being.

Family. That is what I’m thinking of as I wait. My parents, my daughter’s pop-pop and mom-mom who died in 2008 and 2012, respectively. My two siblings who live not far from here. We have neglected each other. We should correct this. Also nearby, close to that tiny Cape Cod that built me, my nephew and his wife, a week away from being parents themselves for the second time.

I feel I drift too much in this world, untethered and aimless. I occupy far too much of my own headspace. It hurts me and others close to me who don’t deserve the drag of my fears, conceptions and preoccupations.

In an odd bittersweet way, as I sit and watch the people and think, my first pass-through Philadelphia in many years has helped bring me back to the ground. It’s where I have to stay. In my mind, I see my father outside the terminal and my mom busy in the kitchen as we walk through the back door 10 minutes later. She shouts “Tom!” as she always did. They are healthy. They are happy. They are proud of me.

I need to make them proud of me again. 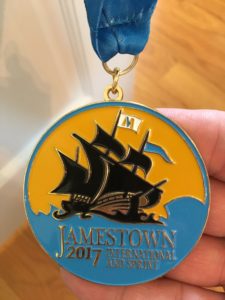 I was fortunate to sit in the dugout and watch one of the finest high-school baseball games I’ve ever seen Wednesday night.

Hanover, a dynasty in Virginia 4A baseball, needed 13 innings at home to take out Jamestown High of Williamsburg 2-1 in a game that sent the winner to the state semifinals.

It was a stunning display on both sides of skill, desire, resiliency, poise and coaching, a state-final caliber contest, no doubt. Wheels were turning, stomachs were flipping, fastballs were buzzing, bats were mostly flailing. That didn’t reflect on the hitting so much as the pitching, two guys apiece for each team. Both starters are committed to Division I programs and threw like it. It was top-notch stuff, a man’s game, a street fight, as they say.

Jamestown — I am a JV coach for the Eagles — pushed a run across early on a triple and an RBI ground out. It took Hanover till the bottom of the fifth to even the score on an error and calm, temporarily, its nervous crowd.

John Cole managed his brains out in the Jamestown dugout, calling pitches, moving fielders, flashing signals at third base trying to get something going, rallying the troops. Cole spent a career, that may not be through, in college coaching, as an assistant and then leading a Division I and a Division III program.

He came to Jamestown last year and took the senior-laden Eagles to the state semifinals with a team that included a couple of Division I recruits, including in the ACC. This team wasn’t as talented or experienced as that one, but it was enterprising and baseball-savvy thanks to Cole, who pretty much conducts a coaching master’s class at every practice. It’s why I always tried to attend at least an hour of varsity practice before the JV practice, to expand my own knowledge base and become a more confident, accomplished coach.

Cole spoon-feeds nothing to the high school kids, even the first-year varsity guys. As in college, he expects a lot, demands a lot, moves fast, teaches constantly, brooks no nonsense. He is stout in his belief in himself and what he teaches. For the obvious reason that it is tried, true and effective.

The proof is on the field and, better, in the players’ heads and hearts. Players that move on to college ball report back that it’s as if they took graduate courses in high school by playing for Cole. They come in to their higher level of baseball significantly ahead of the curve, they mean.

But for the greater number of kids who will never play beyond high school, their season or two with John Cole will unquestionably serve them when it comes to the (old school?) life and business skills of listening, respecting, committing to a task, following directions and setting challenging, even elite, standards for themselves and for their colleagues.

Expect nothing, get nothing.

I expected fun, satisfaction and reward when Cole accepted me into his program to work with his future varsity players. I had no idea.

Thanks, JC. What a night that was. What a season.