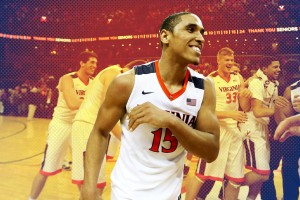 The future president of the United States just was voted the best basketball player, and the best defensive player, in the Atlantic Coast Conference.

In any event, Brogdon, the first ACC player to win both of those honors in the same season, is on the very short list of the most impressive and authentic collegiate student-athletes I had the good fortune to encounter in my few decades as a sports writer.

I got Brogdon during two of his early years at U.Va., when coach Tony Bennett was building the foundation of what has become one of the nation’s strongest and steadiest hoops structures.

From Atlanta, Brogdon was a perfect leadership vessel for Bennett both on the court and as an ambassador among academically oriented elite recruits. Bennett preaches selfless play and relentless team defense, strategies that fit Brogdon’s humility and maturity. And Brogdon is pursuing a master’s in public policy with an eye toward solving problems on a global scale.

He was honored this year with a modest room on U.Va.’s Range – i.e. the Lawn, but for grad students. Brogdon is a study in unflustered self-assurance and self-control, in measured words, bold action and higher principals.

I could quote his statistics, but they don’t really matter. Suffice to say Brogdon could have an NBA future, but that the pro athlete’s mantle is just a small part of what Brogdon is about, a la Princeton’s Bill Bradley from way back in the day.

Very pleased to have had the pleasure.

This way out
Distinct Victory
My Tweets