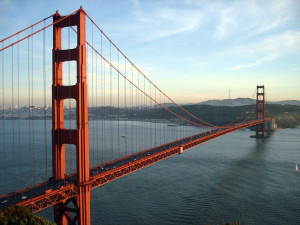 The girl is leaving.

This isn’t leaving for college, though. That was “she’s just going to camp.” Yes, that silliness got me through the rain. Nor is this leaving for Thailand after she graduated from camp. She went to teach English, to travel, for all the adventures those pursuits would suggest. But she wouldn’t be buying land outside Bangkok and motor-biking in every day to sell grilled chicken on the streets to the locals and tourists. She would be back.

This is different, much more. This is emptying the closets, packing the bags, boarding the plane, disembarking on the other side of the country, in the city of her dreams, San Francisco, where her best  friend lives, and where her new job awaits just across the bay in the postcard village of Sausalito.

This is goodbye for real.

But it is time, for us both. So the tears will be that layered blend in which you don’t know where joy overlaps pain, or in what quantities, but you know both are in there, hugging each other, having a good cry themselves.

I don’t remember my mom crying as she stood at the backyard fence outside Philly and watched me pull away, for good, with everything I owned in a piece-of-crap Datsun bound for the far-off southern land of Norfoke. I guess my dad was at work; he doesn’t appear in the portrait in my mind. And sure, mom probably went inside the brick Cape Cod and lay prostrate for days . . . but she put a good face on it, at least. I wasn’t her first to leave, anyway. My brother coincidentally lived in Richmond at that point, but I’m pretty sure she knew he’d be back to the area. And she was right. But with me, I think she knew a few holiday or weekend visits a year – and later, quick dashes from the nearby airport for a cup of coffee during long layovers on newspaper trips – would be the new normal.

That won’t be our case. Too far to travel, as the Datsun flies. Too much excitement and enticement and California thrall for her – she vows to go broke skiing at Lake Tahoe — as she continues to develop the woman, the person, the citizen, the friend. Sure, she could hate it, or be bored with the job, or get sick of gazing at the San Francisco Bay every day of her new life, hahahahaha. But we’re not thinking that’s a possibility, we two, nor do we want it to be.

The week is being filled with farewells to her old job and those friends, and to some of the oldest friends who remain here, although there already aren’t many. Norfolk shouldn’t necessarily take that personally. It’s a big, mobile world. Adventures are being forged, latest chapters are being created, all over the country; Roanoke, Charlottesville, Raleigh, D.C., Chicago, Boston, San Francisco.

At first, the girl wasn’t sure which was for her. She plotted a move to SF on spec: she’d give it a month, then come home – maybe — if she was still jobless. But then Boston became the focus. Man, she wanted to join a certain company there. She knew people, loved the idea of the work, but opportunity was slow to develop. And then . . . a random contact who attended the same university (network online, boys and girls!) volunteered to put a resume in front of the right person at the right cutting-edge ad agency. And yep, the girl took it from there.

Now, it’s for us to take her there. To the airport. To the skies. Through the clouds. Toward her sun.

Life is not a game of perfect
NFL rules; and why U.Va. could rule