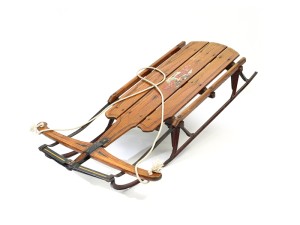 To us, Larry’s Hill seemed a mountain. A steep, asphalt slope packed in ice and dirty snow. It loomed a block over and a block up, and we covered it like ants – the hardy breed that totes wooden sleds — when it snowed amply enough to compel a Flexible Flyer along a rapid descent. I remember it snowed hard, plentifully, back then, although I do wonder if the weather archives would confirm that recall, or if they would call me out as a tale-teller. Perhaps I exaggerate through the mists, yet I very easily picture ancient slides and Polaroids of the sidewalk outside our house on the corner bordered by walls of shoveled snow up to my waist. Chest. Shoulders.

Larry’s Hill was really just the top half of Prospect Ave. It bottomed out at the intersection of 5th Ave. and extended straight and flat another block before it T-boned 4th. We called it Larry’s Hill for the little deli that held forth at the top of the street. Larry was a butcher, a red-smeared smock his giveaway. His was the first place my mom sent me alone to buy the week’s cold cuts, before the shiny Wawa opened nearby and turned Larry’s into a barbershop. A half-pound of boiled ham. Liverwurst. Pimento loaf. “Lunch meat (?).” American cheese. Never Swiss. No provolone. American. I’d read Larry the list, pick up bread and Tastykakes, and cart them to the counter, where Pete, in a cleaner apron would punch the cash register. “Charge it,” I would say. I had no idea what that meant, only that it was Pete’s prompt to dig out a sheet of paper and jot down a note. Directly, as my grand mom used to say, Pete would load the items into a brown bag and I would be off on my two-block trek home.

Snow, though, would transform that trek into a sled-track, or a luge run, depending on whether you mounted the Flexible Flyer headfirst, stretched out on your stomach, or sitting and leaning back, holding the rope tethered to the steering swivel. Like paratroopers awaiting our calls to leap, we would mingle at the top of the hill in a loose array, decked in gloves, wool caps and winter jackets. One would take his running launch and, once a half-the-hill head start had been granted, the next would depart with a whoop, replaced in our ears by the sound of metal blades crunching and wind gushing.

It was Rockwellian, until those times it wasn’t, thanks to the lurking bullies who smoked and inspired fear in the innocents. The ambush on, one would bolt from behind a tree or car and jump on your back, a hobo hopping a freight, or else go straight for the tip over that would separate sled from rider. Screams might ensue, fists (of the braver kids) might fly, and the rider lucky enough to pass unscathed would at last exhaust momentum and trudge back to the summit, relieved to be outside the fracas, at least for the moment.

At least until the next slippery run down a little hill frozen in time.