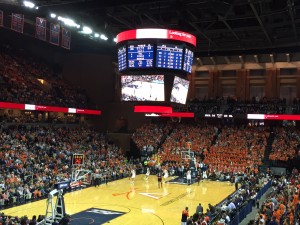 CHARLOTTESVILLE – There has been earlier evidence, but Saturday convinced me that scoring the basketball, as the Dickie V.’s of the hoops world like to chirp, on Virginia presently is one of the hardest things to do in American sports.

More accurately, I should say Louisville’s ugly offense, matched against the smothering blanket of the Cavaliers’ harassing D, convinced me.

The Cardinals, ranked 9th (for whatever the Associated Press rankings are worth), scored four baskets and 13 points in the first half. None of those four baskets, nor any free throws, went through the hoop in the half’s final 10 ½ minutes of what became No. 3 U.Va.’s 52-47 victory, one that stretched its stunning record to 21-1. That’s a serious scoring drought in any league, but one that was raw meat to a ravenous, orange-clad crowd turned out to revel in the cult of their Cavaliers.

For sure, it was a pumped-up night at John Paul Jones Arena, as you would expect. A full house. All the blaring music and rousing cheers that come with it. A home team facing one of the “royalty” programs of college hoops for the first time in ACC play, and its third Hall of Fame coach in three games (Rick Pitino), looking to launch into the last four weeks of the season the right way.

And if U.Va. never quite dominated, thanks to a lackluster offensive game and the hand injury of star guard Justin Anderson, the Cavaliers controlled the play and won with only mild drama. (The Cards closed to within four with 35 seconds left and then three with 18 ticks to go.)

Controlling the play, both with and without the ball, is of course how U.Va. has made its bones under coach Tony Bennett. And so the Cavs made the Cardinals dance: Louisville never led past the opening five minutes and scored its second-fewest points this season.

Especially in the first half, the Cavs flummoxed the Cards with the trap-the-ball-out-front, collapse-on-the-ball-down-low defense on which Bennett has built a stellar career, first at Washington State and now, in his sixth season, at U.Va. Louisville figured some things out in the second half, but that 24-13 halftime deficit was too large to overcome.

So the Cavs are down to eight games left – they will be favored to win them all — before the ACC tournament, and then the NCAAs that follow. That’s the part of the schedule their fans long for — if they could only skip right to it — especially after U.Va.’s long-shot chance at going undefeated was ruined by Duke last Saturday.

It took a while, what with Kentucky’s roster full of NBA prospects dominating the buzz, but the national voices of college basketball eventually got around to acclaiming U.Va. a “legitimate” contender for the throne of March Madness. That’s impressive praise to breathe in, but it’s deserved – for the simple reason that defense should never really have an off-night.

The Cavaliers’ deliberate, but uneven, offense will ultimately come to haunt them. I think. If there is a hedge against that, it’s because the defense and rebounding aspect of the game always comes down to “want-to,” to that hand-in-glove tandem of effort and concentration.

The consistency with which Bennett coaxes that performance from his players, and how regularly they respond – to the hungry cheers of fans conditioned to treat the dwindling of a shot clock like a dog treats a dinner bell – is the new story of U.Va. basketball. One that is, at the top of this stretch run, is about to get even more interesting.