The University of Virginia’s basketball team lost a regional final Sunday that would have sent it to the NCAA Final Four in the worst way possible – by squandering a big lead down the stretch, 15 points in the last 9 1/2 minutes, to be precise.

Better to be blown out from the start and stare at an inevitability all game? Yep, in my book. 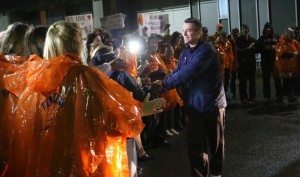 Tony Bennett greets supporters as his team returns to Charlottesville on Sunday. (Photo from virginiasports.com)

Losing late, with victory so close and contested, is harsh. The bigger the game, the more it haunts. Losing late, after you were practically cruising through the later stages, is agonizing. For player and for fan. Why was my kid, a recent U.Va. grad, crying in a San Francisco bar with U.Va. friends as it all came unglued? Because of her love and empathy for her school and her former peers who were so powerful all season, and then were so powerless to stop Syracuse’s winning surge.

The agony of defeat is more than just a poetic phrase.

Pundits say coach Tony Bennett has the Cavaliers poised to remain among the national elite even with the loss of forwards Anthony Gill and Mike Tobey and All-American guard Malcolm Brogdon. Brogdon is a tremendous natural leader, the kind of cool-headed and captivating presence that is not easily replaced. So we shall see about who fills that critical leadership void.

Perhaps Bennett truly has U.Va. – which was a No. 1 tournament seed for the second time in three years – to the point where it simply reloads with elite recruits where others must rebuild. Proof will come soon enough. That of course will do nothing for the seniors who endured the kind of physical letdown that leaves emotional scars.

They had it, and they lost it. Ruminating on how and why will be a lifelong exercise in angst.