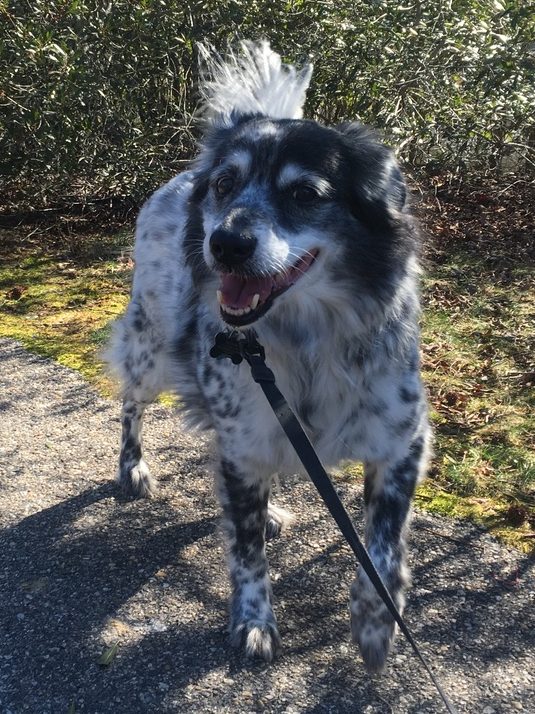 We were so nervous, afraid even. Our dogs, bless them, were not. That made all the difference.

My old yellow lab Ollie, and Dee’s Atticus, a handsome Aussie shepherd-collie mix, had never met until five years ago. She and I were moving toward combined lives, though – three years married this March — so bringing together our loyal paw pals as well was a necessity. One small problem. As a rule, those boys abided few other dogs. It was just their nature. It seemed their meeting, whenever it came, would not be good.

So we prepared. We picked a free Sunday afternoon, a neutral site – no “turf” to defend that way – and hired a trainer to supervise the little meet-and-greet. We parked on different sides of the lot, leashed up our dogs and, like gunslingers to the duel, slowly walked toward each other. Feigning calm and confidence, we met the trainer, still with the boys at a safe remove.

But a strange thing happened. Nothing.

Ollie and Atticus barely looked at each other, each content to just be. The trainer suggested we take a walk. And so we did, gently merging our steps to where first Dee and I were side by side, and then so were our dogs.

And that was that. Peace in the kingdom, friends then and friends always. Until Ollie wore out two years ago and left us with the one sweet, sweet boy who reunited with Ollie a week ago today.

It had been a tough year for Attie, who hit 10 years (or so) at healthy speed before a downhill out of nowhere. First came a serious bout with pancreatitis, followed by chronic bronchitis that gave him a hacking cough. Arthritis flared up, a slow-growing tumor appeared, and his lab work showed significant degrees of kidney and liver distress. Various meds were tried, then others. Energy waned, lethargy grew. Recently Attie’s paw pads began to blister so badly – liver disease can do that – that even simple walks in the backyard were out, let alone our usual twice-daily adventures.

Our solace is the happy place in the world Atticus came to occupy against ridiculous odds. Neglected and abused in his first home – what is wrong with people? – Atticus was salvaged by Deelyn and her kids, who refused to hear it when the vet incorrectly diagnosed terminal cancer at Attie’s first exam! Aside from an, um, often-uncomfortable instinct to protect his house and people, Atticus matured into a perfect pup, a loyal watchman, the most unflagging of friends.

It is a gnawing emptiness. We listen for the shake of Attie’s collar in the morning, my cue to get moving, let’s go, time to eat. We look for him in Dee’s dressing closet, comfy warm and nap-cozy. No one harrumphs at the nettlesome cats anymore. Attie did that job well. You can tell they don’t know what to do, either.

Time will heal, just not yet.

Atticus and Tom Robinson, protagonists of “To Kill a Mockingbird,” linked again, how great is that? Fittingly, Attie came into the room and put his head in my lap the day we let Ollie go. He just knew. “That little dog,” as Dee always called him, gave me one of the most indelible moments of my life.